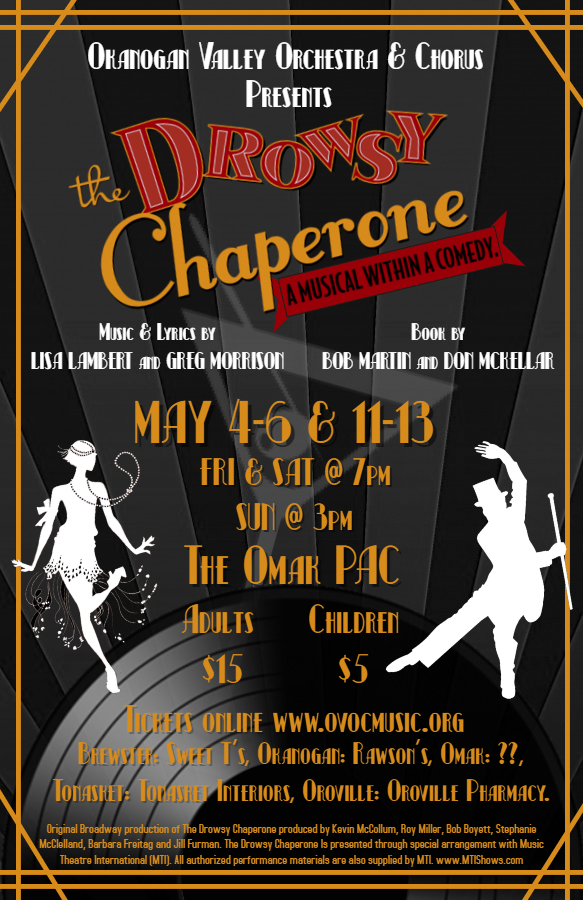 One benefit of aging is selective memory loss. Nearly thirty years ago I vowed I would never again play in the pit orchestra for a live stage musical show. I clearly remember that vow. My memory of why I made it is vague at best. Consequently, I’m back in the pit, playing for this year’s musical produced by the Okanogan Valley Orchestra and Chorus (OVOC).

The show is “The Drowsy Chaperone,” a breezy comedy with a jazzy score and sensational costumes, poking fun at 1920s show biz. The show that led to my long-ago, semi-forgotten vow was “The Music Man.” It was the first musical to be presented in our brand new, then state-of-the-art theater. We’d previously put on community musicals in other spaces but never had an actual pit for musicians. I was thrilled to descend the concrete stairs and settle into the snug space beneath the stage. Then it dawned on me. One of my favorite musicals of all time was unfolding overhead, and I would never get to see it. Ever since, I’ve relished my seat in the audience while sympathizing with musicians in the pit.

Musicians aren’t the only one who don’t see the show. The backstage crew is limited to occasional peeks at the action. They’re all volunteers who love theater so much, they’re willing to miss out.

Last fall, OVOC’s concert coordinator asked if I’d consider being rehearsal pianist for this year’s show. She added in a quiet voice—quieter than a stage whisper—“and maybe the pit orchestra, too.”  I agreed to play for rehearsals even though the music was beyond my technical ability. The rehearsal pianist plays all the orchestra parts, but since it’s only rehearsals, you don’t have to worry about clinkers. You just have to keep the beat.

Community theater is as much, if not more, about community than about theater. A bond develops among volunteers who find energy after their day jobs to devote evenings and weekends to rehearsing, bringing a script to life. In this case, hilariously alive. After months of watching the actors develop their characters and master complex choreography, I was too invested to back away. I wanted to go down to the pit.

That’s where I was opening night with a dozen or so fellow musicians who would play the notes I couldn’t find. House lights dimmed, audience settled in, curtains parted, a funny line delivered, a shy titter from the audience, more lines, heartier laughter, and  we were rolling. By  midway through Act One an ambitious tap dance that’d required extra rehearsals had the audience screaming and shouting—a bonus when that’s all the pay volunteer actors get.

I was reminded. It’s the audience that strikes the match that lights the fire of live theater. Even down in the pit, I didn’t need to see the show to feel the flame.