Normally the Okanogan River is the Rodney Dangerfield (“I don’t get no respect”) of Northwest streams. This spring has not been normal—no surprise in this era of new normals. Usually lackadaisical as it flows past my home, the river has pushed hard against its banks with a force that’s been hypnotic to watch.

For much of its 115 miles, the Okanogan has an identity crisis. It begins as a series of lakes and can’t even get its name spelled consistently. Its source, in Canada where they love their “Ays,” is spelled Okanagan Lake. It doesn’t begin to take shape as a river until it crosses the border, replaces an a with an o, and is joined by its primary tributary: the Similkameen. The beautiful, tumbling Similkameen is longer by seven miles and fed by snowpacks in Canada’s mountains. This year’s snowpack was 200 percent above normal.

In the early 1900s, the Okanogan was a life line for the small frontier towns that situated themselves next to it. At high water, stern wheelers would transport goods, passengers, and the first fruits of a brand new apple industry. Then the railroad came, followed by highways, and our towns have pretty much turned their backs on the river. Except for people who fish, occasional rafters and tubers on hot summer days, and farmers who have water rights to irrigate, the river is ignored.

Then we get a spring like this one. Throughout May, everywhere you went—grocery store, post office, gas station—everyone was talking about the river. I attended the county emergency services meeting, where we heard that in seven days we’d have the third highest crest in recorded history. Two days later it did crest, the third highest crest on record but nearly two feet lower than originally forecast. When you’ve got water creeping ever closer to your home, a mere two feet can give you space to breathe.

I wasn’t worried about my home. Neither it nor the house next door where I lived for thirty years has ever flooded. Not in 1972, the worst flood on record, nor in 1948, the second worst.

A number of homes and businesses were impacted—usually not from the river spilling over its banks or topping levees, but from the surrounding water table seeping upward. The home of my friend Rochelle Riling—an educator, artist, farmer and wise woman—was threatened. She described the feeling: “We were standing on a river that was rising up through the earth right under our feet, and you could feel it, especially when you tried to sleep on it, and it was intense. But that’s what life does, yes?  Rise up under our feet and force us to rise up with it and figure out how to handle wherever it takes us.”

Her home escaped and the river has receded to normal run-off levels, leaving behind a mess of mud and sand. As Rochelle advises, we’re figuring out how to handle it. 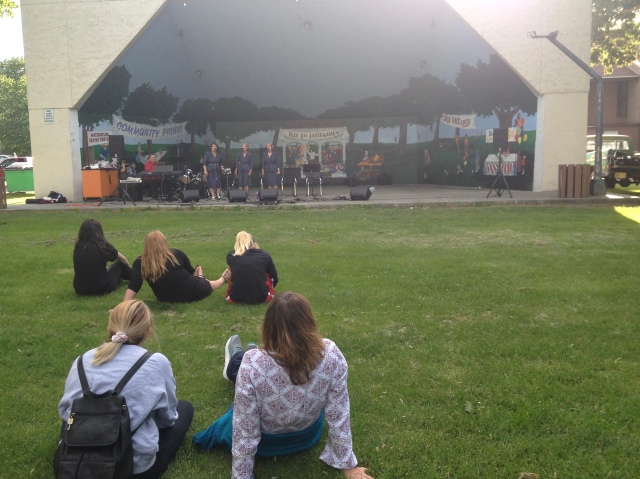 There was a whole lot of toe-tapping going on in heaven Friday night. I could feel the vibrations while I enjoyed a jazz concert at the bandstand in Civic League Park. This little park in the center of town holds the legacies of several generations.

The bandstand is the legacy of the most recently passed generation—folks who had a dream of concerts in the park. A few decades ago they donated money and labor to build an impressive, professionally-designed, concrete structure. Their dream was destined to come true, even after they’ve left us: Dick and Don, Bill and John, Wayne and Ella, Marge and Dave, and others. Their spirits were fully in attendance as music filled the park.

At the south end of the park is the previous generation’s legacy, a thoroughly modern library and cultural center for our small town. Libraries are so much more than just books these days. There are internet services, arts and crafts lessons, read-aloud sessions for tots, book clubs, summer programs for kids, lectures and dramatic presentations.

The legacy of an even earlier generation sits quietly between the bandstand and library: a somber memorial stone for those who gave their lives in World War II.

All around the park is the legacy of pioneer women who settled in a scrappy frontier town little more than a century ago. They envisioned a place of shade in a harshly sun-baked desert. Now we sit under giant trees that grew from seedlings they planted. It was an impossible dream yet they persisted. They pumped water into buckets, then hefted the buckets from their homes to the nascent park. I was told this story by an elderly woman, the daughter of pioneers, when I first moved to town.

I was told another story of an even older generational legacy. About a quarter-mile from Civic League Park, on the other side of the river, East Side Park is a larger and more active expanse with swimming pool, ball fields, rodeo grounds, small museum and RV park. I’ve been told it was originally an Indian allotment, incredibly donated to the community for use as a park.

For many years I held the belief that our parks and public structures should be named for people who contributed to the community, who gave time, talent, and property for the benefit of all. Certainly, I thought, East Side Park should be named for the Native American who gave the land, not for its location relative to the river. But in my town—in pretty much any small town—so many people have given so generously, we’d have to affix a name to every light post and fire hydrant to honor them all.

The sound of high school vocalists improvising scat with convincing skill brought me back to the present from my mental meandering. What, I wondered, will be the legacy of this new generation? They’re already laying the groundwork by keeping the dreams of past generations alive.