What inspires people to collect things? I don’t mean amass stuff, as in hoarding. I mean honing in on a particular genre of items, such as stamps, or antique pistols, or native baskets, or sets of salt and pepper shakers. Why collect things that have no particular usefulness, other than to be looked at, admired, traded, and occasionally dusted?

I’m an accidental and almost indifferent collector of a peculiar line of pottery known as motto ware. It’s also known as Torquay pottery, coming from the town of Torquay in England. The area has a wealth of red terra cotta clay and a number of potteries sprung up in the late 1800s. For several decades—to meet the demands of the tourism trade—they produced low-priced kitchen ware like small pitchers, tea pots and cups, cream and sugar sets, candle holders, and yes, salt and pepper shakers. The items feature a rustic scene on one side and homey advice, such as “Nothing good is got by worry,” etched onto the other.

Some fifty-five years ago, when I left my parents’ home to live on my own, a friend gave me two pieces of motto ware that had been her grandmother’s. I didn’t realize they were a “thing” until I started bumping into motto ware in second-hand stores. They weren’t expensive, so I’d add to my so-called collection: a candle holder advising “Many are called but few get up” a tiny creamer declaring “Bustle is not Industry,” and my favorite, a cheese dish with the sly saying, “If you can’t be easy, be as easy as you can.” My collection of twenty-three pieces is paltry. Serious hobbyists that I found on the internet have hundreds of these preachy, dust collectors lining their shelves.

Yet the “why” is probably as true for them as it is for me. They make me smile. 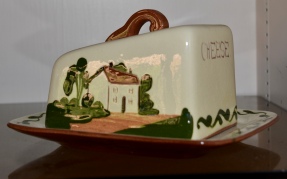 (To celebrate my 75th birthday this month, I’m posting daily stories about the stuff I’ve acquired over a lifetime and can’t let go of. I invite you to consider and possibly share the stories that make you treasure your own stuff.)