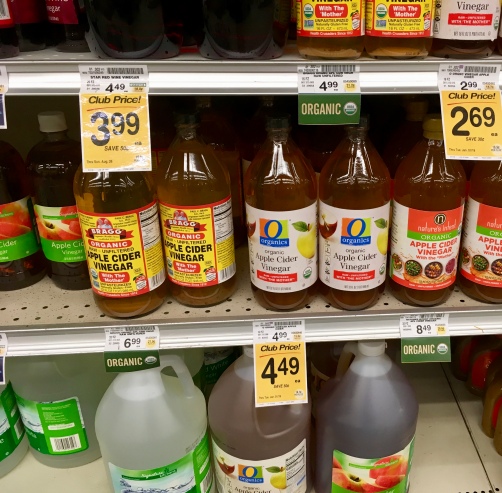 For long minutes stretching into eternity, I stared at the grocery store shelf, paralyzed by indecision, conflicted in a war of values. Finally I grabbed a bottle of apple cider vinegar and fled to the next aisle, where my dilemma would only deepen.

Each of us makes dozens of consumer choices daily. Arguably, the smallest choice can represent a large difference. Note the current kerfuffle over plastic straws. My struggle as a consumer is rooted in the thrift that I learned as a child from my late mother. A daughter of the Great Depression, Mother held two ironclad shopping principles: (1) Buy only what’s on sale; (2) If you can’t buy it on sale, buy the cheapest. Every week, Mother pored over the grocery ads in the newspaper. Armed with her list of sale items, she and a friend toured a half-dozen or so grocery stores. Grocers offer loss leaders in hopes that shoppers will also fill their baskets with non-sale items. Didn’t work in Mom’s case. With military discipline, she stuck to her on-sale list.

I, too, do a pretty good job of sticking to my list—except at Farmers’ Market, where I go kinda crazy. Farmers’ Market represents my own No. 1 rule as a consumer: shop local. I’m a daughter of Earth Day followed by climate change, so rule No. 2 is shop organic, paying special attention to the environment. My crisis of conscience over apple cider vinegar was exacerbated because I’d already abandoned value No. 1. I was at Safeway, a chain operated by a bigger chain, Albertson’s. Usually I shop at the locally-owned Gene’s IGA, but every once in a while I need something not available at Gene’s, like the brand of coffee without which I cannot start my day. See how slippery the slope when we abandon our values?

My mother’s thriftiness reverberated in my soul as I considered my vinegar choices. The price spread was not insignificant: the sixteen-ounce Safeway organic: $2.69; Bragg organic, $4.99. Bragg, of course, boasts that homey, family label that’s been around for a century. A twinge of sentiment there. Further confusing the issue, for just ten cents more than the Safeway organic, I could buy Safeway’s non-organic thirty-two-ounce bottle. That’s nine cents an ounce versus seventeen.

It would take me years to use up a quart of apple cider vinegar. I grabbed the Safeway organic and rounded the corner to pick up a can of tuna, thus jumping from the frying pan into the ocean. Tuna labels tout their brands as saviors of the very species they’re canning. The “Sustainable Seas” brand promises its fish are “100 percent pole and troll caught.” Other labels boast that contents are “Certified Sustainable Seafood” by the Marine Stewardship Council,  “dolphin safe,” and one—“Wild Selections”— had the WWF panda logo. Pandas promoting tuna?! Prices ranged from $1.79 to $4.49—all for the same size can.

I gave up. No tuna sandwich was worth this agony of indecision. Just as well. Later, while checking out the various claims, I ran across advice from the Environmental Defense Fund. Considering the amount of mercury in tuna, says the EDF, buy the can labeled “salmon.”

One thought on “The Last Straw”